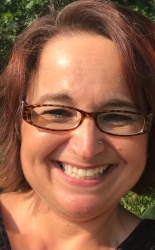 “It takes a village to raise a child” is a proverb that is close to my heart, not only because of the loving inclusive community connotations, but because my family has experienced it firsthand.

Being a sole parent was not something I had planned nor expected, but when my circumstances suddenly changed, I realized that I needed to become aware of all the resources that were available to me and my children. I strived to be the best parent I could be, and truly desired that my children would have all their needs met and reach their highest potential. These were things I feared I could not do alone.

I looked into Big Brothers Big Sisters of Franklin County when my son, Jack, expressed dissatisfaction with being outnumbered in our home by females (me, his younger sister, even our cat, “Izzy”). This comment validated what was already on my radar; his need for positive male role models.

After a thorough intake conversation with the case manager from Big Brothers Big Sisters of Franklin County, which included getting to know all of my son’s interests, personality traits and hobbies, he was matched at one of their two site-based programs with a junior at Deerfield Academy, a student named Miles.

Miles is a respectful, driven student who shared many of Jack’s interests such as basketball, swimming and Pokémon. After only a few weeks of the program, I could see Jack’s excitement peak as Friday approached and he was able to see his “Big.” He specifically mentioned how much he enjoyed playing basketball and swimming on campus.

His two years with Miles boosted my son’s confidence and allowed him to take risks he might not have normally taken in trying new activities. He also learned, from someone other than his mother, the values of striving academically. Miles has since graduated from Deerfield and Jack is in line to be matched again, and I am confident that Big Brothers Big Sisters of Franklin County will continue to be a positive experience for him.

Lilyana, my daughter, was so eager to turn 6 so she too could have a “Big” and has since completed one year with Ally, also from Deerfield Academy. It has already improved her confidence and helped with her social anxiety. She has specifically mentioned how much she has enjoyed doing activities on campus such as swimming and painting her nails.

For me, Big Brothers Big Sisters of Franklin County has given me a few hours to recharge and continue to tackle the hardest job I have ever had, parenting.

To say I am grateful to Big Brothers Big Sisters of Franklin County would not even begin to express my emotions. Big Brothers Big Sisters of Franklin County strives to see the individual needs of each child and meet them with an appropriately matched mentors. It has contributed in large ways to the success of my family and I would highly recommend it to other families as well.

Christina Jette of Turners Falls is mother to “Littles” Jack and Lilyana.